This morning I was swimming, again, in the indoor pool of Essen-Rüttenscheid, that is located in the south of my quarter. With my bike I would take another route but a sleet has begun when I have left my apartment. It is still January and winter. Unfortunately. I dislike the wet and cold weather at this season. In Summer there is not problem with rain and warm temperatures but in winter, it is for me.

It was remarkable but today again because this morning I could smell the fetidness of the exhaust of the cars. It depends on the weather conditioning? The air distance of the airport of Düsseldorf (EDDL) to my work place is 500 meters. There are some days where you can smell the coal oil from the planes when I left the company when the planes begins their takeoffs.

In the front of the indoor swimming pool I saw a bike type that is in Essen really rare. 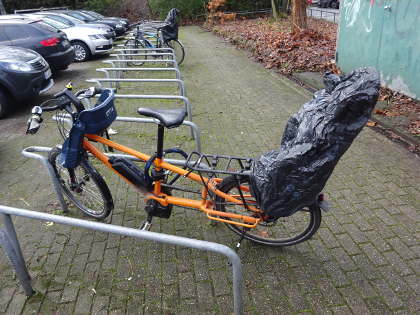 Of course it is Sunday morning everyone means that it is important to swim in the indoor swimming pool of Rüttenscheid. It opens from 8am to 3pm and you have the hole day all lanes where you can swim. But it is the same as in other indoor swimming pools around me.

In the quarter Schonnebeck there is the Nord-Ost-Bad (North-East indoor swimming pool). It is a very little pool where I had been beginning my swimming life. Here I went with my former school class colleagues from the primary school and with my father who could not swim good. He had never learned it.

I left the indoor swimming pool after one hour (it became fuller and fuller in the 50 meter basin, again) and I went back to home with a stop at the main station. This time I had more time in order to watch to a lot of different magazines. It is a dazzling array what you can buy and read. For everything except in order to camp you can find everything. For camping with a tent you can’t find something.

Yesterday in the library there were a lot of children books (roman) about camping but not an How to. I have searched in the library online search catalog. It is strange.

I made a little detour back to home via the main fire station of Essen. It was a good thing that I didn’t feel the urge to go to the toilet. Normally I swallow so much water where I must go three times after swimming to the toilet. 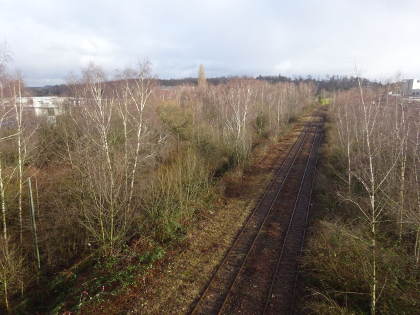 Another destination was a bridge where I did a stop in order to watch the way for the new bicycle path to Bochum. The first part was opened in 2010 between Mülheim and Essen (city center). Originally it already should construct to Bochum, but the municipality of Essen has detect a lot of problems with the new extension to Bochum due to an old (110 years) chemical installation (ex. Goldschmidt) Everyone in the administration knew that the new bicycle path would go along the chemical installation but the planing of the path had begun at least when the first part was opened. It should opened in 2019 but now no one know when this part will open. Perhaps later than 2025.

For a German administration is that very fast but in the global comparison, it is of course, too long.

The planner of the first part have forgotten to build a bridge over a street. That means you go by bike on a ramp to the traffic lights, you must wait one or two minutes in order to cross the street and then you go further. The German administration thinks that is a modern way to cross a street. A bridge that was build in the past for an old railway was not necessary for a bicyclist.

Now they have begun the planning for two years and they want to end in 2022 (the bridge has a length about 72 meters). Supposedly there were financial problems because suddenly the administration remarks that it is better the way is better when it will be expanded about 1,5 meter. For this problem arise the problem for the funding. The German administration is always doltish.

The tracks under the bridge where I took pictures will still lie waste for the next 10 years and perhaps longer because the bike traffic has not preferences because the car is the most important means of transportation. There is no turnaround in the German government.

In Germany, and in Essen you must be a greenie like where you must intent on going by bike like me. Fickle persons who loves their cars never go by bike when it rains.